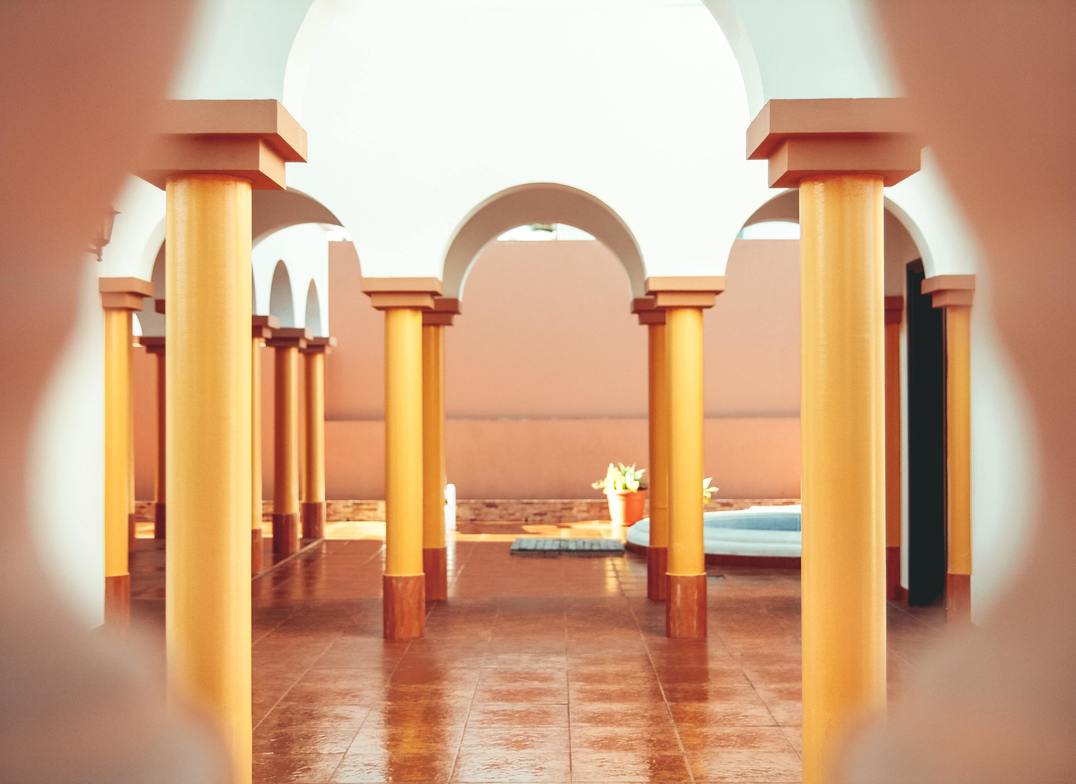 The History of the Ark of God.
God commanded Moses to make a box, or Ark, to house the Tables of the Law, and to be a seat for the Lord God. This Ark of the Covenant was captured by the Philistines around the 29th year of King Saul's reign. The Ark was in the Philistines' possession for 7 months (1Samuel 6:1).  In consequence of the plagues that came on each city where the Ark was kept in Philistia, it was reluctantly returned by them to Israel.

Arrived in Beth-shemesh, it was unloaded by Levites (1 Sam 6:15); and sacrifices were offered before it that day. After opening it and looking inside; the Beth-shemeshites incurred upon themselves the curse of God, in which 50,070 men were slaughtered (1 Sam 6:19). The people of Beth-shemesh therefore declined to open their homes to it. They sent to the people of Kirjath-jearim, who were slaves and serviced the House of God with water and wood, to come and fetch the Ark (1Samuel 6:21).

The House of the Ark of God.

The village of Kirjath-jearim was grouped with Gibeah, Gibeon, Ramah and Jerusalem (Joshua 18:25-28) as they were all very close together; less than a days walk. The area became the property of the tribe of Benjamin, and Gibeah the home city of Kish and his son Saul.

1Chronicles 9:39 "And Ner fathered Kish. And Kish fathered Saul. And Saul fathered Jonathan, and Malchishua, and Abinadab, and Eshbaal".

The house of Abinadab, (son of King Saul), was in Gibeah, the city on the peak of the hill" (2 Sam 6:3) where the name Gibeah is also translated, 'the hill'. It would appear that these villages were so close to each other that they were called the cities of Gibeon, or the 'Hill Cities'.

Thirteen years after the Ark was placed in the house of Abinadab, King Saul was slain by the Philistines in a battle on Mt. Gilboa bordering the valley of Armageddon. Abinadab was also killed in that battle together with his father Saul (1Sa 31:2). This ended the 40 year reign of Saul.

David succeeded Saul as King, and reigned in Hebron 7 years. He takes Jerusalem, makes it his new Capital City, and decides to bring the Ark to Jerusalem (2 Sam 5:3-7). Abinadab is no longer alive, but the Ark is still in the "House of Abinadab" (2Samuel 6:3)

The Honor of the Ark of God.

"And they cause the ark of God to ride on a new cart, and lift it up from the house of Abinadab, which is in the height, and Uzzah and Ahio, sons of Abinadab are leading the new cart;" (2 Samuel 6:3).

Dramatic tragedy takes place as the procession moves toward Jerusalem. Uzzah sees the cart lurch, and stretches out his hand to steady the Ark, and keep it from falling. Fire from heaven strikes him dead. (2 Samuel 6:6-8)  In the original Hebrew, the word is violent and graphic. It says that Uzzah literally exploded!

This raises questions in the mind of the reader. The answers are to be found within the pages of the Bible.

Answer: Kish is listed among the Levites (2Chronicles 29:12).The sons of Kish married the daughters of Eleazar the Priest (1Ch 23:22).   There were no sons of Eleazar, so the sons of Kish were Levites, the natural guardians of the Ark of God (Num 36:8-9).

Answer: "And when Aaron and his sons have made an end of covering the sanctuary, and all the vessels of the sanctuary, as the camp is to set forward; after that, the sons of Kohath shall come to bear it: but they shall not touch any holy thing, lest they die." (Num 4:14).
Uzzah was a Levite and the old saying still remains true, ‘Ignorance of the law is no excuse.'

The Ark of God was so sacred, that God decreed that not even the Levites may touch it. Only the Priests could approach the Ark. It was to be honored, and revered as the Throne of God, for here was where the Glory of God descended.

David and Israel followed the Philistine method of making a new cart and attaching Oxen to it (1Samuel 6:7, ff). David's excitement changed to self recrimination as he realized that God was not going to accept men's ways of doing religion.

It took King David three months to find out what the proper procedure was, and once they followed that, the Ark was safely brought to its place near the Holy City. If there is one thing we can learn from this story, it is that refusing to follow the directions God laid down, does not make God go away. God makes the rules, and we are blessed when we follow them.